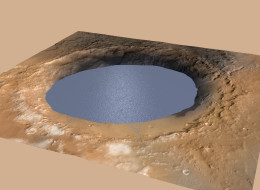 Ancient Mars may have been much wetter than scientists thought.

New data from NASA’s Curiosity rover indicate the red planet’s Gale Crater once contained a massive lake–and that Mount Sharp, the mountain at the center of the 96-mile-wide crater, formed from the build-up of sediment over tens of millions of years.

The new finding suggests that large, long-lasting lakes once dotted the Martian landscape, raising the possibility that the planet was once habitable.

“The size of the lake in Gale Crater and the length of time and series that water was showing up implies that there may have been sufficient time for life to get going and thrive,” NASA’s Mars Exploration Program scientist Dr. Michael Meyer told Reuters.

Curiosity collected the new data on its five-mile drive to Mount Sharp, the prime destination on its mission to study Mars’ climate and geography. The rover landed in Gale Crater in August 2012.

In March, scientists discovered that the crater contained beds of sandstone that were tilted south toward Mount Sharp. They believed these rocks were deposited by streams that fed into a larger body of water in the center of the crater.

After reaching Mount Sharp in September, the rover spent two months studying rocks in the Murray formation at the base of the three-mile-high mountain, discovering fine layers of mudstone–which tend to collect at the bottom of lakes.

This depicts how a mountain inside a Mars’ Gale Crater might have formed. At left, the crater fills with layers of sediment. At right, the deposits have been sculpted by wind erosion into a mountainous shape.

“If our hypothesis for Mount Sharp holds up, it challenges the notion that warm and wet conditions were transient, local, or only underground on Mars,” Dr. Ashwin Vasavada, Curiosity deputy project scientist at NASA’s Jet Propulsion Laboratory in Pasadena, Calif. said in a written statement. “A more radical explanation is that Mars’ ancient, thicker atmosphere raised temperatures above freezing globally, but so far we don’t know how the atmosphere did that.”

Vasavada said Curiosity will continue to study changes in the rock formation as it climbs Mount Sharp in the next few months, which should test the team’s hypothesis.

“We’ll also look at the chemistry of the rocks to see if the water that was once present would’ve been of the kind that could support microbial life, if it ever was present,” he said in a video released by NASA (see above). “With only 30 vertical feet of the mountain behind us, we’re sure there’s a lot more to discover.”

By broboinhawaii in Science on December 9, 2014.
← Fuel to the fire? Fuel exports soar under Obama How to search for old Facebook posts – CNET →