GF’s George Friedman comments that in absolute terms, U.S. productivity saw its first decline in over a decade in 2016. He sees that declining productivity as the beginning of a global shift that means the economic expansion that began 1982, with the expanding use and availability of microchips, is now in an irreversible structural decline.

The U.S. began a cycle of rapid productivity growth starting in the early 1970s, when the microchip entered the consumer and commercial markets. The initial disruption was led by the introduction of a hand-held calculator called the “Bowmar Brain,” as well as the Casio watch. Those were followed in 1975 by MITS Altair 8800 as the first personal computer.

That means the microchip industry’s commercial history is nearing 50 years old — about the same age as Ford was in 1953, after being founded in 1903. According to Friedman: “The automobile was a mature product by then, with some minor innovations still to come, but with the primary focus on styling and marketing.”

Detroit’s “Big Three” in 1953 were at “culturally the high point of automobiles, when new models were accompanied by great excitement.” But the automobile was becoming a commodity. Higher quality and lower cost German and Japanese vehicles surged into the American market over the net two decades. The federal government had to bail out Chrysler as the upper midwest became the “Rust Belt.”

Microchip technology revolutionized industrial, administrative and government functions by increasing productivity across all levels of the economy. But productivity increases were heavily concentrated on an individual basis, not across all workers.

Microchip technology motivated financial restructuring to eliminate large numbers of low-skilled workers. High-skilled workers that leveraged the technology commanded high wages, but marginalized less-skilled workers had to settle for lower-wages or watch their jobs be exported to low-wage countries.

END_OF_DOCUMENT_TOKEN_TO_BE_REPLACED

It’s December 15, 2015, and an auditorium in Geneva is packed with physicists. The air is filled with tension and excitement because everybody knows that something important is about to be announced. The CERN Large Hadron Collider (LHC) has recently restarted operations at the highest energies ever achieved in a laboratory experiment, and the first new results from two enormous, complex detectors known as ATLAS and CMS are being presented. This announcement has been organized hastily because both detectors have picked up something completely unexpected. Rumors have been circulating for days about what it might be, but nobody knows for sure what is really going on, and the speculations are wild.

Jim Olsen, the CMS physics coordinator, takes the stage first, giving a presentation with no surprises until the very end, when two plots appear showing the energies—theoretical and actual—carried by a flood of particles emerging from head-on collisions between protons traveling at nearly the speed of light. If you squint, there appears to be bump in the experimental curve, suggesting too many events at one point than theory would predict. It could be evidence for a new, unexpected particle—but at a level that’s merely interesting, not definitive. We’ve seen things like this before, and they almost always go away when you look more closely.

END_OF_DOCUMENT_TOKEN_TO_BE_REPLACED

One thing you may know about particle physics experiments is that they’re enormous. The Large Hadron Collider is five or so miles in diameter, big enough to circle some towns. Stanford’s Linear Accelerator is two miles long. Scientists are hoping a new experiment will lead to far smaller but still extremely powerful accelerators.

Scientists at CERN ran some of the first tests at the AWAKE experiment yesterday, a new kind of accelerator based on a concept that might be able to cut the size of particle physics experiments down by a factor of a hundred or more.

Colliders like the Large Hadron Collider have lots of parts, but generally need a place to store particles, a place to speed them up to incredibly high speeds, a place to smash them together or against something else, and a place to look at all of the particle bits that came out of the resulting explosion. Part of the speeding up requires pushing the particles by putting them through a series of alternating electric fields. To get the particles faster, scientists build longer experiments rather than more powerful ones. The AWAKE experiment, also known as the “Proton Driven Plasma Wakefield Acceleration Experiment,” will use a whole new method that will get particles going much faster in a shorter amount of time.

END_OF_DOCUMENT_TOKEN_TO_BE_REPLACED

The results of a new investigation into strange flashes of light picked by the Large Hadron Collider (LHC) back in December have just been announced at a conference in Italy, and physicists are getting cautiously excited that they could be the signs of new particle that could break the standard model of physics.

While further experiments are still needed to confirm if this apparent excess of photons really is evidence of a new particle, the fact that no one’s been able to disprove what physicists have seen hints that we could be close to discovering something extraordinary. “If this thing turns out to be real, it’s a 10 on the Richter scale of particle physics,” physicist John Ellis from King’s College London, and the former head of theory at CERN, told The Guardian. “One’s excitometer gets totally broken.”

Before you all set your own excitometers to “Holy crap!”, let’s run through what just happened here, because while these could be the signs of something huge afoot, they could also be nothing – just the craziest of statistical coincidences.

END_OF_DOCUMENT_TOKEN_TO_BE_REPLACED

It’s Official: Pluto Is a Weirder Place Than You Ever Imagined

Last July the space probe New Horizons made humanity’s first flyby of Pluto and glimpsed a world stranger and far more complex than anyone had imagined. Rather than dull and dead, the dwarf planet is smattered with odd geographical features and, somehow, ongoing geological activity. Today, we’ve learned even more about this weird world and its moons from the scientists trying to make sense of the discovery, who published the first detailed analysis of Pluto’s landscape, atmosphere, moons, chemistry, and its surprising interaction with solar wind. Outlined in five new papers published in the journal Science, scientists have their first hints  at the origin of mysteriously complex landscape.

“This was the human race’s first visit to a planetary body living out in the Kuiper Belt, [the region beyond Neptune], so it’s an entirely new class of world,” says Bill McKinnon, an astrophysicist at the University of Washington in St. Louis and deputy lead of the New Horizons Geology, Geophysics and Imaging team. “It turned out to be really crazy.”

McKinnon co-authored the paper in today’s batch that’s an overview of the menagerie of geographical features found on Pluto. As McKinnon will tell you, there are a lot.

END_OF_DOCUMENT_TOKEN_TO_BE_REPLACED

Sparkling at the center of this beautiful NASA/ESA Hubble Space Telescope image is a Wolf-Rayet star known as WR 31a, located about 30,000 light-years away in the constellation of Carina (The Keel).

The distinctive blue bubble appearing to encircle WR 31a is a Wolf-Rayet nebula – an interstellar cloud of dust, hydrogen, helium and other gases.

Created when speedy stellar winds interact with the outer layers of hydrogen ejected by Wolf-Rayet stars, these nebulae are frequently ring-shaped or spherical.

END_OF_DOCUMENT_TOKEN_TO_BE_REPLACED

Solar Cells As Light As A Soap Bubble – Eurasia Review

Imagine solar cells so thin, flexible, and lightweight that they could be placed on almost any material or surface, including your hat, shirt, or smartphone, or even on a sheet of paper or a helium balloon.

Researchers at MIT have now demonstrated just such a technology: the thinnest, lightest solar cells ever produced. Though it may take years to develop into a commercial product, the laboratory proof-of-concept shows a new approach to making solar cells that could help power the next generation of portable electronic devices.

Bulovic, MIT’s associate dean for innovation and the Fariborz Maseeh (1990) Professor of Emerging Technology, says the key to the new approach is to make the solar cell, the substrate that supports it, and a protective overcoating to shield it from the environment, all in one process. The substrate is made in place and never needs to be handled, cleaned, or removed from the vacuum during fabrication, thus minimizing exposure to dust or other contaminants that could degrade the cell’s performance.

END_OF_DOCUMENT_TOKEN_TO_BE_REPLACED

Solar-powered trackers on wings have recorded California condors soaring to 15,000 feet, while locators attached to humpback whales have revealed 1,000-foot dives to underwater mountains. And GPS collars on Yellowstone grizzly bears are giving new insights into one of the most studied large carnivore populations in the world.

Technological advances in recent years have allowed what could be the most inquisitive Earth dweller of them all, humans, to invent ever more ingenious tracking devices to find out what their fellow inhabitants are up to.

“It’s a large field that’s developing very fast,” said Alex Zerbini, a research biologist with the National Oceanic and Atmospheric Administration’s National Marine Mammal Laboratory in Seattle. “There are many types of tags being developed for many species of marine animals.”

END_OF_DOCUMENT_TOKEN_TO_BE_REPLACED

Gravitational Waves Exist: The Inside Story of How Scientists Finally Found Them – The New Yorker

Just over a billion years ago, many millions of galaxies from here, a pair of black holes collided. They had been circling each other for aeons, in a sort of mating dance, gathering pace with each orbit, hurtling closer and closer. By the time they were a few hundred miles apart, they were whipping around at nearly the speed of light, releasing great shudders of gravitational energy. Space and time became distorted, like water at a rolling boil. In the fraction of a second that it took for the black holes to finally merge, they radiated a hundred times more energy than all the stars in the universe combined. They formed a new black hole, sixty-two times as heavy as our sun and almost as wide across as the state of Maine. As it smoothed itself out, assuming the shape of a slightly flattened sphere, a few last quivers of energy escaped. Then space and time became silent again.

END_OF_DOCUMENT_TOKEN_TO_BE_REPLACED 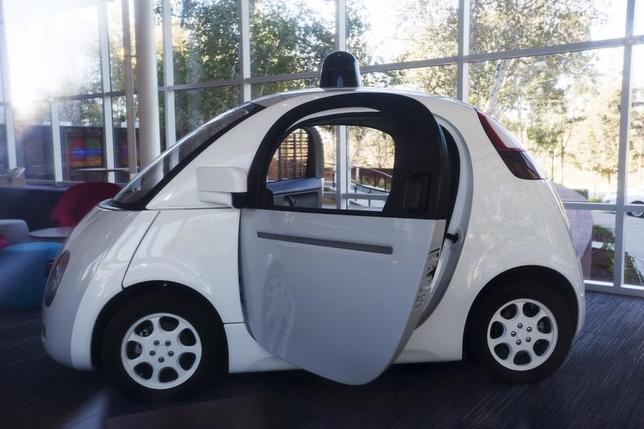 U.S. vehicle safety regulators have said the artificial intelligence system piloting a self-driving Google car could be considered the driver under federal law, a major step toward ultimately winning approval for autonomous vehicles on the roads.

The National Highway Traffic Safety Administration told Google, a unit of Alphabet Inc (GOOGL.O), of its decision in a previously unreported Feb. 4 letter to the company posted on the agency’s website this week.

Google’s self-driving car unit on Nov. 12 submitted a proposed design for a self-driving car that has “no need for a human driver,” the letter to Google from National Highway Traffic Safety Administration Chief Counsel Paul Hemmersbaugh said.

“NHTSA will interpret ‘driver’ in the context of Google’s described motor vehicle design as referring to the (self-driving system), and not to any of the vehicle occupants,” NHTSA’s letter said.

“We agree with Google its (self-driving car) will not have a ‘driver’ in the traditional sense that vehicles have had drivers during the last more than one hundred years.”