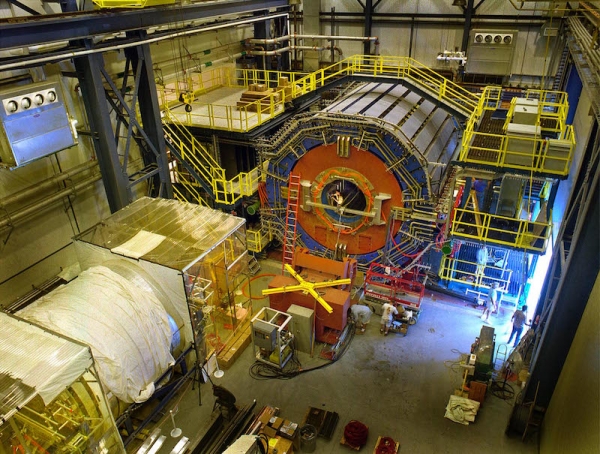 An unexpected “bump” in the data coming out of collision experiments with the Large Hadron Collider in Switzerland has scientists wondering if they’ve witnessed evidence of previously-unknown subatomic particles.

The collision, which cannot be explained by the Standard Model of physics, may have been evidence of a previously-undiscovered particle, or maybe even two particles, researchers say.

Because the particles, if they in fact exist, would fly in the face of the accepted model, scientists found themselves facing a possible and significant re-thinking of what they have long taken for granted.

“It was so weird that people were forced to chuck their favorite theories and start from scratch,” says Adam Martin, an assistant professor of physics at the University of Notre Dame. “That’s a fun area of particle physics. We’re looking into the unknown. Is it one new particle? Is it two new particles?”

The new finding is particularly puzzling because it was previous work with the LHC that allowed researchers to identify the Higgs boson, sometimes referred to as the “God particle,” that gives all matter mass and is the foundation stone of the Standard Model.

Theoretical work predicting the existence of the Higgs boson won the Nobel Prize in Physics for Peter Higgs and Francois Englert in 2013.

In the data coming out of the latest experiments, there were two deviations from what the Standard Model predicts.

There is some speculation that the “bump” in the latest data could be a sign of a heavier version of the Higgs, Martin and his colleagues note; there could also be a number of other mundane explanations, Martin acknowledges.

That’s common in science, he points out, as initial excitement about a possible discovery fades with further research.

Still, it could also open the way to new insights and require new physics models, he suggests.

“People are still cautiously optimistic,” he says. “Everybody knows that with more data, it could just go away. If it stays, it’s potentially really, really, really exciting.”

Martin and his colleagues from Cincinnati and New York have published a paper in which they consider some explanations for the LHC data.