Home » Science » YaleNews | Tweaking the beak: Retracing the bird’s beak to its dinosaur origins, in the laboratory

YaleNews | Tweaking the beak: Retracing the bird’s beak to its dinosaur origins, in the laboratory 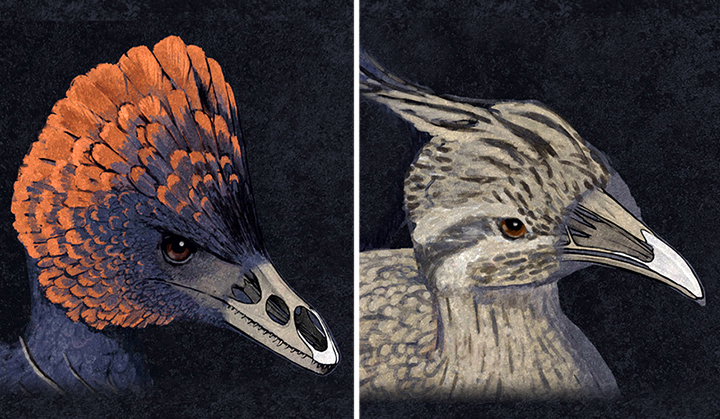 Scientists have successfully replicated the molecular processes that led from dinosaur snouts to the first bird beaks.

Using the fossil record as a guide, a research team led by Yale paleontologist and developmental biologist Bhart-Anjan S. Bhullar and Harvard developmental biologist Arhat Abzhanov conducted the first successful reversion of a bird’s skull features. The scientists replicated ancestral molecular development to transform chicken embryos in a laboratory into specimens with a snout and palate configuration similar to that of small dinosaurs such as Velociraptor and Archaeopteryx.

“Our goal here was to understand the molecular underpinnings of an important evolutionary transition, not to create a ‘dino-chicken’ simply for the sake of it,” said Bhullar, lead author of the study, published online May 12 in the journal Evolution.

Finding the mechanism to recreate elements of dinosaur physiology has been a topic of popular interest for some time. It has been featured in everything from molecular biologist Jack Horner’s 2009 book, “How to Build a Dinosaur,” to the upcoming Hollywood movie “Jurassic World.”

In this case, the fascination derives from the importance of the beak to avian anatomy. “The beak is a crucial part of the avian feeding apparatus, and is the component of the avian skeleton that has perhaps diversified most extensively and most radically — consider flamingos, parrots, hawks, pelicans, and hummingbirds, among others,” Bhullar explained. “Yet little work has been done on what exactly a beak is, anatomically, and how it got that way either evolutionarily or developmentally.”

In the new study, Bhullar and his colleagues detail a novel approach to finding the molecular mechanism involved in creating the skeleton of the beak. First, they did a quantitative analysis of the anatomy of related fossils and extant animals to generate a hypothesis about the transition; next, they searched for possible shifts in gene expression that correlated with the transition.

The team looked at gene expression in the embryos of emus, alligators, lizards, and turtles. The researchers discovered that both major living lineages of birds (the common neognaths and the rarer paleognaths) differ from the major lineages of non-bird reptiles (crocodiles, turtles, and lizards) and from mammals in having a unique, median gene expression zone of two different facial development genes early in embryonic development. This median gene expression had previously only been observed in chickens.

Using small-molecule inhibitors to eliminate the activity of the proteins produced by the bird-specific, median signaling zone in chicken embryos, the researchers were able to induce the ancestral molecular activity and the ancestral anatomy. Not only did the beak structure revert, but the process also caused the palatine bone on the roof of the mouth to go back to its ancestral state. “This was unexpected and demonstrates the way in which a single, simple developmental mechanism can have wide-ranging and unexpected effects,” Bhullar said.

The work took Bhullar from the alligator nests at Rockefeller Wildlife Refuge in southern Louisiana to an emu farm in Massachusetts. He extracted DNA from various species in order to clone fragments of genetic material to look for specific gene expression.

Bhullar said the research has several implications. For example, he said, if a single molecular mechanism was responsible for this transformation, there should be a corresponding, linked transformation in the fossil record. “This is borne out by the fact that Hesperornis — discovered by Othniel Charles Marsh of the Yale Peabody Museum of Natural History — which is a near relative of modern birds that still retains teeth and the most primitive stem avian with a modernized beak in the form of fused, elongate premaxillae, also possesses a modern bird palatine bone,” he said.

Premaxillae are the small bones at the tip of the upper jaw of most animals, but are enlarged and fused to form the beak of birds.

Bhullar noted that this same approach could be used to investigate the underlying developmental mechanisms of a host of great evolutionary transformations.

The other corresponding authors are Zachary Morris, Elizabeth Sefton, Bumjin Namkoong, and Jasmin Camacho, all of Harvard; Atalay Tok, of Uppsala University; Masayoshi Tokita, of Toho University; and David Burnham, of the University of Kansas.

via YaleNews | Tweaking the beak: Retracing the bird’s beak to its dinosaur origins, in the laboratory.

By broboinhawaii in Science, USA News on May 13, 2015.
← What the BLEEP? BitTorrent’s secure messaging app arrives • The Register Crew Change on International Space Station Is Delayed – NYTimes.com →