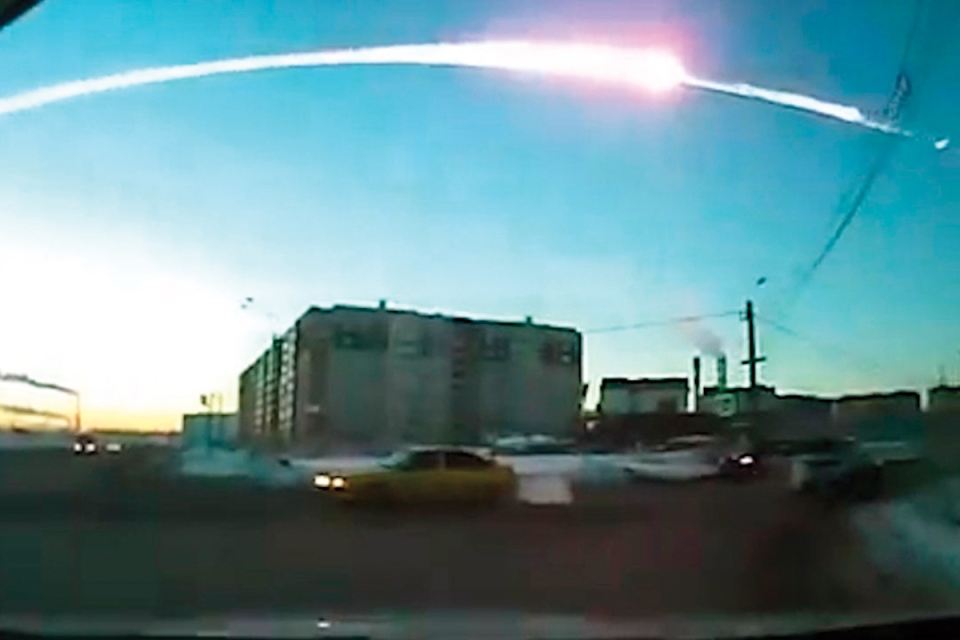 The early evangelist Paul became a Christian because of a dazzling light on the road to Damascus, but one astronomer thinks it was an exploding meteor

NEARLY two thousand years ago, a man named Saul had an experience that changed his life, and possibly yours as well. According to Acts of the Apostles, the fifth book of the biblical New Testament, Saul was on the road to Damascus, Syria, when he saw a bright light in the sky, was blinded and heard the voice of Jesus. Changing his name to Paul, he became a major figure in the spread of Christianity.

William Hartmann, co-founder of the Planetary Science Institute in Tucson, Arizona, has a different explanation for what happened to Paul. He says the biblical descriptions of Paul’s experience closely match accounts of the fireball meteor seen above Chelyabinsk, RussiaMovie Camera, in 2013.

Hartmann has detailed his argument in the journal Meteoritics & Planetary Science (doi.org/3vn). He analyses three accounts of Paul’s journey, thought to have taken place around AD 35. The first is a third-person description of the event, thought to be the work of one of Jesus’s disciples, Luke. The other two quote what Paul is said to have subsequently told others.

“Everything they are describing in those three accounts in the book of Acts are exactly the sequence you see with a fireball,” Hartmann says. “If that first-century document had been anything other than part of the Bible, that would have been a straightforward story.”

But the Bible is not just any ancient text. Paul’s Damascene conversion and subsequent missionary journeys around the Mediterranean helped build Christianity into the religion it is today. If his conversion was indeed as Hartmann explains it, then a random space rock has played a major role in determining the course of history (see “Christianity minus Paul”).

That’s not as strange as it sounds. A large asteroid impact helped kill off the dinosaurs, paving the way for mammals to dominate the Earth. So why couldn’t a meteor influence the evolution of our beliefs?

“It’s well recorded that extraterrestrial impacts have helped to shape the evolution of life on this planet,” says Bill Cooke, head of NASA’s Meteoroid Environment Office in Huntsville, Alabama. “If it was a Chelyabinsk fireball that was responsible for Paul’s conversion, then obviously that had a great impact on the growth of Christianity.”

Hartmann’s argument is possible now because of the quality of observations of the Chelyabinsk incident. The 2013 meteor is the most well-documented example of larger impacts that occur perhaps only once in 100 years. Before 2013, the 1908 blast in TunguskaMovie Camera, also in Russia, was the best example, but it left just a scattering of seismic data, millions of flattened trees and some eyewitness accounts. With Chelyabinsk, there is a clear scientific argument to be made, says Hartmann. “We have observational data that match what we see in this first-century account.”

The most obvious similarity is the bright light in the sky, “brighter than the sun, shining round me”, according to Paul. That’s in line with video from Chelyabinsk showing a light, estimated to be around three times as bright as the sun, that created quickly moving shadows as it streaked across the sky.

After witnessing the light, Paul and his companions fell to the ground. Hartmann says they may have been knocked over when the meteor exploded in the sky and generated a shock wave. At Chelyabinsk, the shock wave destroyed thousands of windows and knocked people off their feet.

Paul then heard the voice of Jesus asking why Paul, an anti-Christian zealot to begin with, was persecuting him. The three biblical accounts differ over whether his companions also heard this voice, or a meaningless noise. Chelyabinsk produced a thunderous, explosive sound.

Paul was also blinded, with one account blaming the brightness of the light. A few days later, “something like scales fell from his eye and he regained his sight”. Our common idiom for suddenly understanding something stems from this description, but Hartmann says the phrase can be read literally. He suggests that Paul was suffering from photokeratitis, a temporary blindness caused by intense ultraviolet radiation.

“It’s basically a bit of sunburn on the cornea of the eye. Once that begins to heal, it flakes off,” says Hartmann. “This can be a perfectly literal statement for someone in the first century who doesn’t really understand what’s happening.” The UV radiation at Chelyabinsk was strong enough to cause sunburn, skin peeling and temporary blindness.

Raj Das-Bhaumik of Moorfields Eye Hospital in London says the condition is common among welders whose eyes are exposed to bright sparks, but the symptoms aren’t exactly as Hartmann is suggesting. “You wouldn’t expect bits of the eye to fall off; I’ve not come across that at all,” he says. It’s possible that the thin skin of the eyelids could burn and peel off, he says, but that is unlikely to happen in isolation. “If this were a meteorite, I’m sure you’d have other damage as well.”

Mark Bailey of Armagh Observatory in the UK, who previously identified a Tunguska-like event in Brazil in the 1930s, says it’s worth analysing old texts for clues to ancient impacts – bearing in mind that accounts are shaped by what people knew at the time. “Sometimes that doesn’t make sense to us, but it does make sense if you can reinterpret it.” What does he think of Hartmann’s argument? “He does a very detailed analysis,” says Bailey.

“I would label it as informed speculation – Bill Hartmann is an excellent author,” says Cooke. “But like so many other things in the ancient past there is no real concrete evidence, no smoking gun.” And with no other accounts from the time to draw on, there is little additional evidence to confirm or disprove the idea.

A search for meteorites in and around Syria could prove fruitful – Chelyabinsk left small chunks all over the region – but even that would be inconclusive. “If a meteorite is discovered in modern Syria in the future, the first thing to test would be how long it’s been on the Earth and whether it could potentially be associated with such a recent fall,” says Bailey. But even with our best techniques, dating such a rock to the nearest hundred years would be difficult.

Even so, Hartmann believes we need to think seriously about the implications of his idea. “My goal is not to discredit anything that anybody wants to believe in,” he says. “But if the spread of a major religion was motivated by misunderstanding a fireball, that’s something we human beings ought to understand about ourselves.”

Falling meteor may have changed the course of Christianity – space – 22 April 2015 – New Scientist.

By broboinhawaii in Christianity, Science on April 27, 2015.
← 3 Important Church Trends in the Next 10 Years | The Exchange | A Blog by Ed Stetzer Why do we let New Atheists and religious zealots dominate the conversation about religion? – Salon.com →