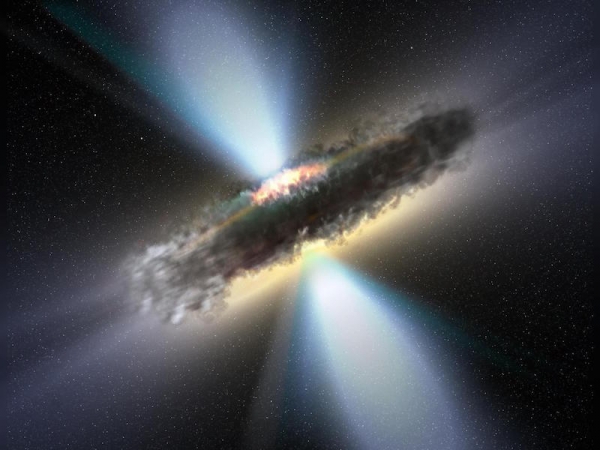 Astronomers say a flashing light from the depths of space may prove a theory that black holes at the center of two merging galaxies will end up as gravitationally locked “twins” in close orbit around each other.

The recent detection of a pulsing quasar may be evidence of such black hole twins, or binaries as they are known, astronomers at the University of Maryland say.

“We believe we have observed two supermassive black holes in closer proximity than ever before,” says astronomy Professor Suvi Gezari, one author of a study published in Astrophysical Journal Letters.

The black hole duo is possibly so close together they are also emitting gravitational waves as predicted by Einstein’s theory of general relativity, he adds.

When black holes feast on surrounding matter, that matter is heated and accelerated to the point where it emits massive amounts of energy, creating examples of some of the brightest energy sources in the galaxy, known as quasars.

Scientists theorize that when a pair of black holes is orbiting in a binary pairing, that consumption of matter will be cyclical, with a resulting periodic dimming and brightening of the quasar they’ve created.

So the Maryland astronomers went in search of such a phenomenon, using the Pan-STARRS1 Medium Deep Survey telescope in Hawaii.

They found what they were looking for in a quasar, PSO J334.2028+01.4075, with a massive black hole of around 10 billion solar masses and emitting a periodic flash of light repeating every 542 days.

The light output of the majority of quasars is arrhythmic, not regular, so the clock-like precision of the quasar’s emitted energy is strong evidence that its associated black hole is in fact two such objects in a binary system, the researchers say.

As larger and larger telescopes come online, the researchers note, surveys of much larger regions of space could potentially locate thousands of merging black holes.

Such telescopes could allow astronomers to watch a “movie” of such systems evolving, says Liu.

“What’s really cool is that we may be able to watch the orbital separation of these supermassive black holes get smaller and smaller until they merge.”

By broboinhawaii in Science on April 21, 2015.
← The end of the license plate | WashingtonExaminer.com Vampire squids have unusual reproductive habits that hint at longer lives – The Washington Post →