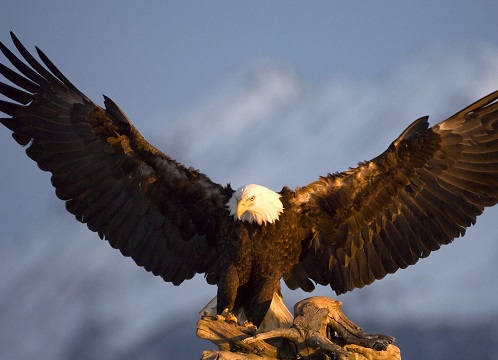 American wildlife researchers have stated that the bald eagle, which once was on the verge of extinction in the United States, has seen substantial increase in its population.

After almost reaching the verge of extinction, the bald eagle population in US seems to have grown. People across the country are spotting more bald eagles flying overhead and the conservationists are welcoming the sights of new nesting grounds for the birds that were once endangered.

Patti Barber, endangered birds biologist at the Pennsylvania Game Commission, said, “It’s hard to step away from the fact that they are our nation’s symbol and knowing that they’ve now come back from the brink. I think a lot of people have a lot of pride that we managed to do that.”

The bald eagle was adopted as the symbol for newly formed United States of America in 1792. The researchers stated that the country may have been home to around 100,000 nesting eagles at that time. In the mid-1800s, first major decline in the number of bald eagles was noted. The introduction of pesticide DDT after World War II was the biggest blow to the population of the bird.

The Bald Eagle Protection Act of 1940 was established to protect the eagles. They were protected from intentional harm. The use of DDT was banned in United States in 1972 but it seems that the measure came too late. However, the birds have been dropped from ranks of endangered species in 1990s after several years of efforts. Presently, 69,000 bald eagles fly across U.S., which is an increase from the 487 nesting pairs that were seen back in 1963.

However, the researchers have stated that the problem is not over yet. They have now witnessed an alarming number of bald eagles being treated for injuries. Many of their wounds are from other bald eagles as the birds are now competing for space. And some birds are nesting in residential areas as well. They believe that in the over the past 20 years, the amount of suitable habitat for bald eagles to breed-in has decreased.