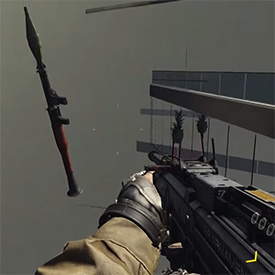 Note to game developers: It’s probably best to clean up all your assets before a game ships, lest gamers with absolutely nothing else to do find some creative way to stumble across your secrets—or misplaced items.

In this case, the latest bit of digital adventuring comes from the latest Call of Duty: Advanced Warfare title. In it, you have to head on over to the game’s thirteenth mission—Throttle—and go pretty far off the beaten path by jumping your way to the very top of one of the map’s buildings. On top, you’ll find a rather odd looking gun floating in the air. It’s named “WEAPON_RPG”—an item the game’s developers likely meant to delete at some point and never did.

You can, however, equip the oddly named weapon. Oddly named, and oddly fitted to Call of Duty: Advanced Warfare’s general environment, as it’s a fairly older device among the game’s lasers, plasma rifles, and other futuristic weaponry. As an added clue that the game’s developers likely didn’t intend to keep it in, the rockets themselves don’t do much damage when you fire them at things. And the gun itself doesn’t actually make any noise when you fire it.

If you’d like a step-by-step tutorial for checking out the hidden gun yourself, be sure to check out the video from Achievement Hunter below. And here’s a friendly warning: Turn your volume down for the first 15 seconds or so, as the video’s narrators get all loud and screamy before the actual Call of Duty action happens.

Of course, that isn’t the only easter egg buried within Call of Duty: Advanced Warfare. If you don’t want to wait (or pony up cash) to gain access to zombies within the game, via the Havoc downloadable content pack that arrives on January 27, then there’s another easter egg of-sorts you can take advantage of to fight off some undead baddies.

First off, you have to unlock all of the game’s Exo Survival maps by playing a ton of rounds of co-op survival mode with your friends (50 rounds to unlock Tier 1 maps, 75 rounds on Tier 2 maps, and 100 rounds on Tier 3 maps to unlock all four tiers). After that, you have to beat 10 rounds on the Tier 4 map, Riot. The eleventh round summons forth the zombies; survive, and you’ll get a Dead Rising-like helicopter evacuation from the map, a little cutscene for your efforts, and access to some awesome bonus multiplayer skins for your character.