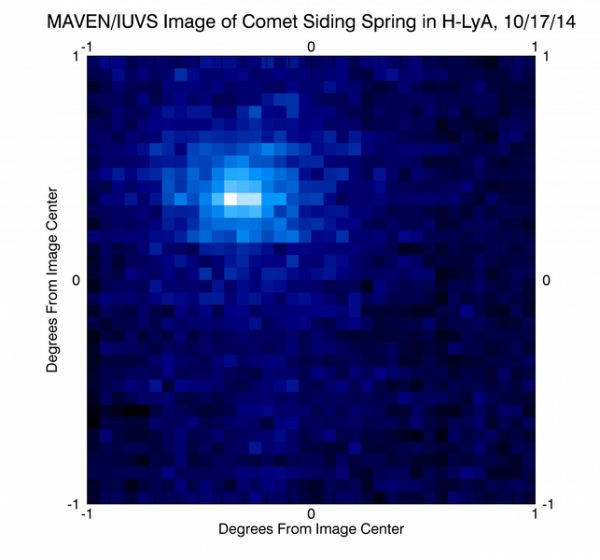 A meteor shower flew by Mars last month, triggered by a passing comet named Siding Spring. Two NASA missions and one ESA mission caught this rare event on their equipment, and scientists are beginning to study the data to make sense of this event. These three missions yielded new data showing that the comet directly affected Mars’s atmosphere, causing a large increase in the layer of ions in the upper atmosphere of Mars.

The comet passed by Mars on October 19. NASA’s Mars Atmosphere and Volatile Evolution (MAVEN) mission, NASA’s Mars Reconnaissance Orbiter (MRO), and the ESA’s Mars Express spacecraft all detected a change in the level of ions in Mars’s ionosphere caused by fallout from the comet. This is the first time scientists have ever been able to show a correlation between a passing meteor and an increase in the layer of ions on a planet.

Green said that NASA was surprised by the amount of dust the comet generated. Fortunately, in anticipation of a potential dust storm, NASA moved its MAVEN spacecraft to avoid damage from the meteor shower.

“Observing the effects on Mars of the comet’s dust slamming into the upper atmosphere makes me very happy that we decided to put our spacecraft on the other side of Mars at the peak of the dust tail passage and out of harm’s way,” Green said.

MAVEN’s Imaging Ultraviolet Spectrograph sensed the comet’s effect by observing an increase in the ultraviolet produced by magnesium and iron ions, which stayed strong for two hours after the comet’s passing and then petered out over the next two days. NASA was not able to capture images of the meteor shower, but they had an artist create a depiction of how the shower likely appeared.

MAVEN will continue to look for long-term changes that this comet’s passing may have made to the atmosphere on Mars.

By broboinhawaii in Sports, Technology on November 9, 2014.
← Gorbachev Warns World Is ‘On Brink of New Cold War’ – WSJ – WSJ Could Large Hadron Collider Discovery Be Something Else? Researchers Look to Techni-Higgs Particles : PHYSICS & MATH : The Science Times →