Tear Gas and the Betrayal of Hong Kong | TIME 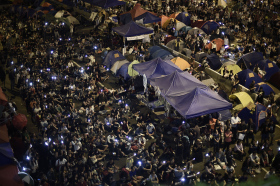 On Sunday, Sept. 28, 2014, we stood among the estimated 80,000 Hong Kong protestors in the Admiralty neighborhood that hosts the government headquarters when tear gas began raining down on us. The effects were immediate: a searing and near-paralyzing burn of our skin, eyes, nasal passages, and lungs that intensified with each attack, which totaled 87 rounds and an unknown number of canisters in nine different locations that night. Discomfort lasted for days afterward.

We are American expatriates who have lived in Hong Kong for years studying policy challenges facing transitional societies, but don’t normally consider ourselves activists. We were out there because we have seen a disturbing erosion in the political freedoms and rights promised to our city since the 1997 handover to China, when it was agreed that Hong Kong would operate under “one country, two systems” for 50 years until 2047. Concern bubbled to the surface in 2003, when the Hong Kong government proposed security legislation that gave it the power to quash “subversion” defined broadly to including legitimate dissidence and free speech. A 2012 effort to introduce national education reform promoting controversial “Chinese patriotism lessons” heightened concern. Both proposals were shelved after massive public protests, which were legal. Now, despite allowing everyone to vote for the Chief Executive in 2017, Beijing has established an ideological litmus test (candidates must “love the country”) and raised the requirements for becoming a candidate such that it effectively allows the Chinese Communist Party to choose the winner. In addition, fears were further raised by the language and timing of a June 2014 “white paper” that made it clear Hong Kong enjoys its autonomy entirely at the Chinese Communist Party’s discretion, sparking this movement that has gone beyond legal protests into occupying roads and other forms of civil disobedience.

Moreover, we were in the streets to acknowledge the growing discontent among Hong Kong residents over a widening economic disparity and the government’s role in creating it. In a city of millionaires and billionaires, where many well-off Mainland visitors happily spend their wealth, one-fifth of Hong Kong’s population currently lives below the poverty line (equivalent to $461 a month). Small business owners and entrepreneurs are finding it increasingly difficult to pay the escalating rent. The uneven distribution of wealth has only been exacerbated by Beijing’s strategy of allowing a few friendly tycoons’ businesses to grow exponentially, thereby consolidating power in a manageable number of “leaders” and stabilizing the political environment.

via Tear Gas and the Betrayal of Hong Kong | TIME.

By broboinhawaii in World News on October 17, 2014.
← What Is Behind San Francisco Giants’ Bizarre Even-Year Postseason Magic? | Bleacher Report Does Mimas have an ocean under an icy cap? | Science/AAAS | News →