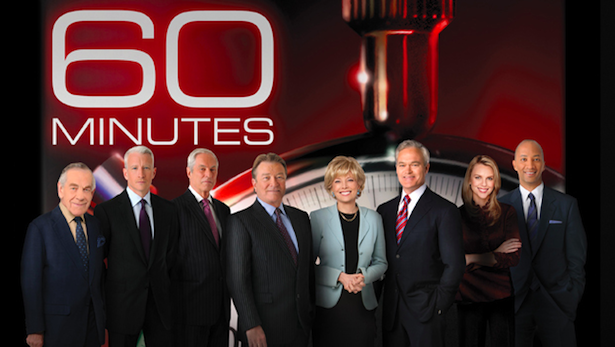 On 60 Minutes, the news-magazine show that prides itself on “hard-hitting” investigations and interviews, correspondent Steve Kroft, who has won most of the highest awards in his industry, has just broadcast another softball interview with the most powerful man in the world, a performance that ought to earn him a rebuke from his peers in the news business but almost certainly won’t. His CBS bio page proudly touts his unparalleled access to President Obama: He scored the first post-election sit down after Election 2008, another exclusive following the killing of Osama bin Laden, and a third sit-down as the president kicked off his reelection campaign.

Little wonder that Obama keeps going back. The 60 Minutes brand is associated with probing interviews, and Kroft is adept at using his tone and manner to create the impression of tough questions without actually asking any. For Sunday’s interview, Obama and Secretary of State Hillary Clinton, who sat beside him, benefited from 60 Minutes gravitas while answering questions better suited to Ellen. It hardly matters whether Kroft is deliberately pulling his punches to secure ongoing access or is simply disinclined to fulfill the core journalistic duty of holding powerful people accountable for their actions; his Obama interviews ought to diminish his standing and the reputation of his employer.

Lest you think I am being too hard on Kroft, here are all of the questions broadcast from his Obama-Clinton interview:

“This is very improbable. This is not an interview I ever expected to be doing. But I understand, Mr. President, this was your idea. Why did you want to do this together, a joint interview?”

“There’s no political tea leaves to be read here?”

“It’s no secret that your aides cautioned you against — actually were against you offering Secretary Clinton this job. And you were just as determined not to take it. And you avoided taking her phone calls for awhile because you were afraid she was going to say no. Why were you so insistent about wanting her to be secretary of state?”

“You’ve been quoted as thinking or telling people that there was no way you were going to take this job and you weren’t going to let anybody talk you into it. What did he say that night that made you [change your mind]?”

“What did he promise you? And has he kept the promises?”

So far, that’s five questions, all of them easy, concerning events that happened four years ago, and focus on the interpersonal drama of those events. They elicited no new information, and were highly unlikely to elicit anything of substance. Did Kroft imagine for a moment that he’d get an honest answer to a question like, “What did Obama promise you when you agreed to be secretary of state?” I’d call it amateur hour if I thought it was asked out of naivete, but Kroft is not naive.

By broboinhawaii in USA News on September 28, 2014.
← The Integration of Christianity and Psychology: A guest post by Sarah Rainer | The Exchange | A Blog by Ed Stetzer The Health Effects of Leaving Religion – The Atlantic →