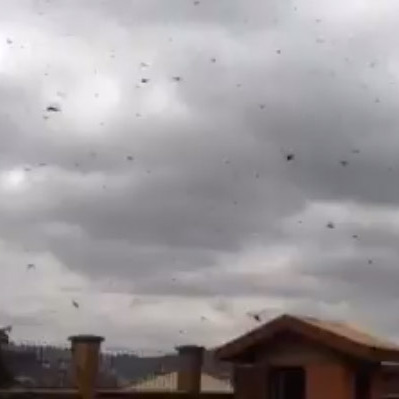 ISIS. Israel versus Hamas. Burning Man. Killer cops. Tan suits. Kids firing Uzis. Taylor Swift’s disappointing VMA performance. There is proof all around us that the world is coming to an end. And now, we’ve got it on video.

A man in Madagascar captured this video of locusts swarming the capital city of Antananarivo on Thursday. This is the third straight year in a row the African nation has been plagued by the pests, which can decimate crops and lead to food shortages.

The world may be ending, but let’s try to keep calm. In the immortal words of Moses, “shake it off.”

via Video Proof It Is Truly End Times — NYMag.

By broboinhawaii in World News, World Religions on August 30, 2014.
← The Politics Of Every Major U.S. Religion, In One Chart | ThinkProgress Study: Ash in Missoula from Yellowstone supervolcano would be light →