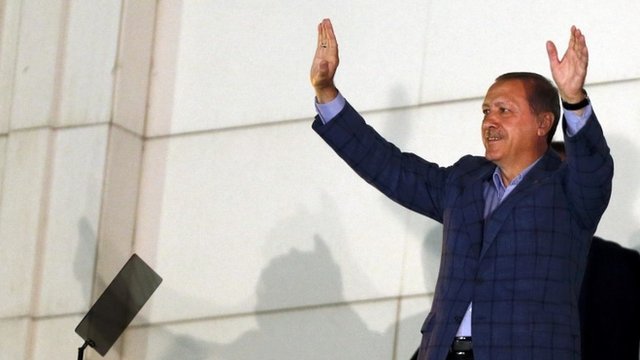 With almost all the votes counted, Mr Erdogan had won about 52%, against 38% for main rival Ekmeleddin Ihsanoglu.

The huge margin of victory means there is no need for a run-off.

Mr Erdogan, who has vowed to bolster the power of the president, promised supporters a “social reconciliation period”, saying: “Let’s leave the old discussions in the old Turkey.”

He added in the speech in Ankara: “Today, not only those who love us, but also those who don’t have won. Today Turkey has won.”

The veteran leader, who has spent three terms as prime minister, is revered by supporters for boosting the economy and giving a voice to conservatives.

But his critics lament his authoritarian approach and Islamist leanings in a secular state, says the BBC’s Mark Lowen in Ankara.

After the provisional results were announced Mr Ihsanoglu, joint candidate for the two main opposition parties, said: “I congratulate the prime minister and wish him success.”

Mr Erdogan has been prime minister since 2003 and was barred from standing for another term.

He needed more than 50% of the vote for an outright victory, avoiding a second round.

Our correspondent says turnout appears to be much lower than expected – some voters may have been dissuaded by the summer heat and holidays.

Turkey – wedged between the turmoil of Iraq, Syria and Ukraine – is an important ally for the West, our correspondent adds, and whoever becomes head of state will hold a key geopolitical position.

Mr Erdogan’s other rival, Kurdish politician Selahattin Demirtas, took about 9% of the vote.