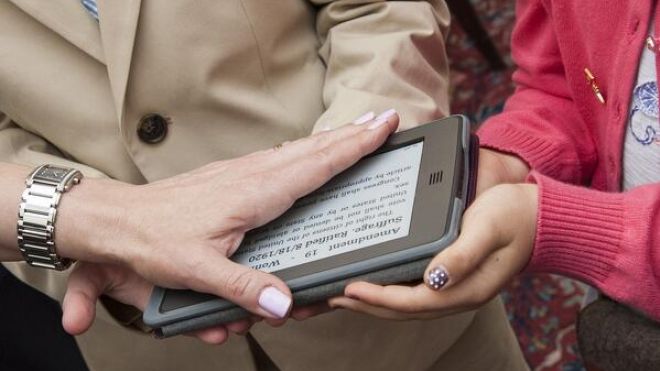 It was called the wave of the future – the recently tapped U.S. ambassador to Switzerland was sworn in last month with her hand not on a paper Bible but on top of a Kindle.

Techies called it revolutionary and applauded Suzi Levine for making history. But she wasn’t the only one who went high-tech when she took the oath of office. A county executive from Long Island, N.Y., used the Bible app on an iPad to be sworn in last year and a few months ago a group of firefighters from New Jersey huddled around a Kindle Bible when they took their oath.

But the movement has drawn concern from some in the religious community who are reluctant to accept officials choosing tablets over the printed Bible.

“There is an inherent respect given to the print version of the Bible that doesn’t attach itself to a Kindle or the iPad,” Donald Whitney, a professor at Southern Baptist Theological Seminary, told Fox News Latino. “Because the Bible is nothing else. It is a holy book to Christians and it is the Word of God. If you have a digital device it may contain the Bible but it also contains other things.”

Whitney says that he personally uses digital resources from time to time, but that choosing to use a tablet for an oath of office sends a different message.

Levine, the ambassador, stirred some controversy when she used the tablet to be sworn in – but she said it was all she had at her disposal at the time.

“It symbolized for me the very best of our nation, especially around innovation, entrepreneurship and the voice that each of us has in our democracy,” she said last month.

But not all religious scholars are concerned with the increased use of technology at the pulpit.